The nuclear electricity option is dead…isn’t it?

Several possible objections to replacing all fossil fuel power plants with nuclear reactors beg to be addressed. So what if the number of myths and misconceptions surrounding nuclear energy is vast? So what if nuclear power plants are the only source of large scale electricity without a carbon footprint? Going nuclear would be a lose-lose scenario, wouldn't it? Wouldn't we be trading the risks of continued contribution to global warming for the risks of nuclear accidents and nuclear waste disposal? Besides, isn't nuclear energy a dead option? Can't we just build more solar plants and wind turbines? Can't we use better nationwide energy conservation?

Let's begin with the "energy conservation" objection. If everyone always turned off their lights when not using them, replaced incandescent lamps with compact fluorescents, lowered heating temperatures in the winter, raised air-conditioning temperatures in the summer, and used nothing but energy-efficient appliances in the home, we could possibly reduce our current electricity consumption by 10-15%. (The estimates vary) The problem is getting everyone to do all these things. The pressure to reduce electricity consumption has been considerable since the turn of the millennium, but only a significant minority of the population has actually done it. Plus, roughly a quarter of the population doesn't believe that there is really a human contribution to the global temperature increases, glacial melting, ocean temperature increases, and etc., which support global warming concerns. To them, global warming is little more than "pseudo-science", and "merely" a theory. Though their beliefs are entirely politically-generated and scientifically corrupt, the "anti-global-warming" community will conserve only if they choose to do so. Many, if not most, choose to not conserve. Unfortunately, although conservation is a viable and appropriate option to help reduce our carbon foot-printing, realistically we cannot expect conservation efforts to meet any of our lofty hypothetical expectations.

Over the past decade, solar and wind-power technologies have literally made a quantum leap in converting solar radiation and wind into electricity. Recent breakthroughs have promised solar energy conversion efficiencies of 30-35% in the next 5 years, which is about the same as nuclear and fossil fuel burning efficiencies. These breakthroughs can, and should, make solar a much bigger contributor to electrical production than it is now, which is less than 2% of the total. But, there's still the unavoidable problems of not working at night, reduced production during cloudy days, and the enormous areas of land that must be covered with solar cells. With wind, even with the greatly improved efficiencies now being demonstrated in harnessing the available energy in even the gentlest of breezes, power production varies directly with wind intensity. Production literally changes from day to day, and sometimes hour-to-hour. Plus, not all parts of America are windy enough to make wind a viable and economical option. Solar and wind are inherently intermittent. Regardless, solar, wind, and conservation will definitely help us in reducing our carbon footprint from fossil-fueled electricity production, but together they cannot realistically come close to eliminating it.

It is easy for us to think that America literally shuts down at night, because we all work during the day, go home after work, and sleep through the dark hours of the night. One problem with this notion is that more than a quarter of America's adults are retired, and don't follow the above routine. Additionally, working America doesn't "go home and relax" at the end of the workday. One might assume that America uses more electricity during the workday than during the time between going home from work and going to bed. As it turns out, electricity demand actually goes up after people go home from work. In the winter, the thermostat gets turned up as soon as we enter the house, and in the summer the air-conditioning increases once we get home. Also, there's cooking dinner, doing laundry, turning on lights when we enter rooms (and turning them off when we leave them, right?), television (now averaging more than 2 per family), computers (about 2 per family), and a myriad of other electrical appliances we use after we get home.

Plus, America is like the city of New York; America's electical consumption never sleeps! Power plant operators can literally tell the time of day by watching the flow of electricity through the local power distribution grid. When people get out of bed in the morning and perform their morning rituals before going to work, electricity demand makes a significant increase. For roughly an hour during "commuter time", demand decreases a bit, then increases up to our daytime, workday level for 8-9 hours, which is only a bit more per hour than the peak "morning ritual" level. At the end of the workday, demand drops a little during the "commuter hour", then suddenly increases dramatically. The after-work, in-the-evening, before-we-go-to-bed demand jumps about 20% above the daytime-workday level. And, stays there for 5-6 hours. Eventually, humans go to sleep, and demand for electricity drops accordingly, but demand for power does not go to sleep with us. Industries working around-the-clock, government functions, police and fire crews, hospitals, the military, and etc., are operating throughout the night. Realistically, we need large-scale electrical power production that works round-the-clock, supplemented by smaller sources that can change when the peaks and valleys of the demand for electricity occur.

The minimum power-demand level is essentially what we see during the night-time, when America sleeps. This is called the "base load". Base load is roughly two thirds of what the electricity demand is during the peak evening hours, after the workday. Right now, about 20% of our base-load production is nuclear, some 10% is from renewables which are mostly hydroelectric and biomass, about 20% comes from the burning of natural gas, and nearly all the rest (~50%) is produced through the burning of coal. While coal gets all the negative publicity for leaving a carbon footprint, we must admit that burning natural gas also contributes to global warming, albeit not with the severity of coal. Using the above data, one can see that about 70% of our base load electricity sources are ones that leave a carbon footprint, literally 24-7. Replacing them with nuclear plants would eliminated these fossil-burning sources.

There is some objection to the position of nuclear having no CO2 emissions. One letter to us stated, "Nuclear energy isn't really a zero-carbon system, since you still have to build power plants, mine and process uranium, and, transport new and spent fuel. All of these rely on CO2-emitting fuel sources." This is true, but not only of nuclear energy. The same holds for all traditionally-mentioned renewables such as solar and wind energy. An absolute avoidance of carbon foot-printing is essentially a pipe dream. However, if one compares the carbon costs of building a 1000 MW nuclear plant to the cost of either a solar or wind farm of the same electrical output, we find that nuclear actually several times less CO2 to build. Plus, the amount of land devoted to a nuclear plant is nearly 100 times less than solar or wind of the same output. As for mining and processing, the huge amount of technology needed to build and operate a solar or wind farm requires a much higher volume of mined and processed ores than nuclear. On the other hand, the constant need of replenishing exhausted nuclear fuel cells is a financial and carbon cost for nuclear that has no equivalent in solar and wind. However, if and when the recycling of nuclear fuel becomes a reality, the costs of mining and processing ore will drop dramatically. Plus, the possible use of the "waste" atoms as a resource after 50 years of radioactive decay will off-set the costs of refueling in part, if not in total. The point is...nuclear energy produces electricity and does not produce greenhouse gasses, acid rain gasses, or any of the ash material that always comes with the burning of fossil fuels.

Would we be trading one terrible risk for another by converting to nuclear as our primary source of electricity? The several pages in this website serve to answer this question, and answer it with a resounding "No!" Global warming is a serious issue, grounded in a virtual mountain of supporting data. Human civilization, since the dawn of the industrial revolution, has been negatively changing the oceanic, land, and atmospheric environments of our planet. For the first century after the start of the industrial revolution, Mother Earth's natural processes seem to have handled the increasing human input of carbon emissions and methane rather well. However, after World War II, we began to overload these natural processes and our blanket of warming gasses has steadily grown. The growth rate increases each year that passes, and increases faster and faster as each year goes by. Add to this the technological emergence (and carbon foot-printing) of half the world's population in Asia over the past two decades, and one can see the future is much less than rosy. This is the future of global warming, not merely a hypothetical risk. A global warming catastrophe isn't merely possible, it's inevitable!…unless we stop adding more and more greenhouse gasses into the air around us.

On the other hand, most nuclear power plant "risks" are exaggerations spawned by Hiroshima, and amplified greatly ever since by a world's public that doesn't know their fears are based on mostly fictitious mass-opinions. The Hiroshima Syndrome exists because most people don't know the difference between nuclear bombs and reactors...because the public doesn't know the difference between radiation and fallout...because we don't know that there are safe levels of ionizing radiation...because we don't know China Syndrome is a fiction...because most people don't know nuclear waste can be recycled...because the public has no idea as to what nuclear waste actually consists in. The public fears nuclear energy because of opinions and beliefs that are based almost entirely on misconception and exaggerated doomsday conjecture. The public fears nuclear power plants because of the Hiroshima Syndrome.

Surprisingly, the nuclear energy option in our country is far from dead. In 2009, President Obama re-opened the nuclear option by asking that 30 new nukes be under construction before the end of his first term. This means that for the first time in 30 years, new nukes can be built and operated in America. Since then, some 28 new nuclear power plants have been proposed... 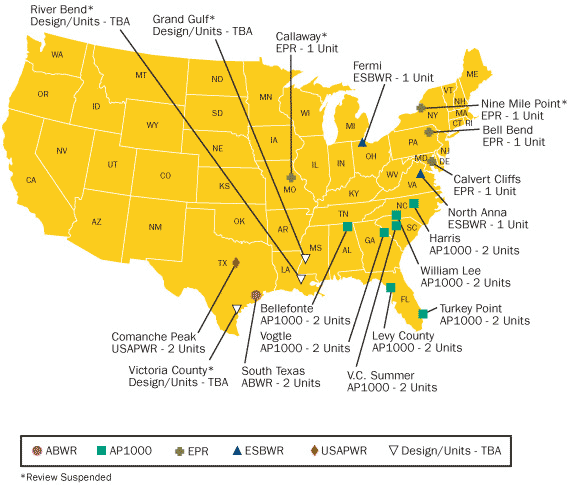 Whether or not they will actually be built is speculative, but the beginning of the end of the de-facto moratorium on nuclear energy has begun. For the full benefit of this potential nuclear renaissance can be realized, the Hiroshima Syndrome must be removed from the public psyche.

The choices ahead of us will be difficult and costly. But, of this we can be sure…only one form of large-scale electricity production operates around-the-clock and leaves no carbon footprint. That singular source is nuclear. If America bites the bullet and converts away from our reliance on fossil fuel burning by going nuclear, it is possible the rest of the carbon-foot-printing world will follow. What's the alternative? Kiss Greenland's glaciers good-bye in about than 50 years (if not sooner), with a sea level rise of more than 20 feet. Kiss Antarctica's glaciers good-bye in roughly 100 years, with an additional sea level rise of 130 ft. Not to mention additionally-severe storms all over the world, acidic oceans, aquatic species' extinctions, and etc. Let's take a clue from our naturally-nuclear Mother Nature.