Cooling towers are neither nuclear nor radioactive 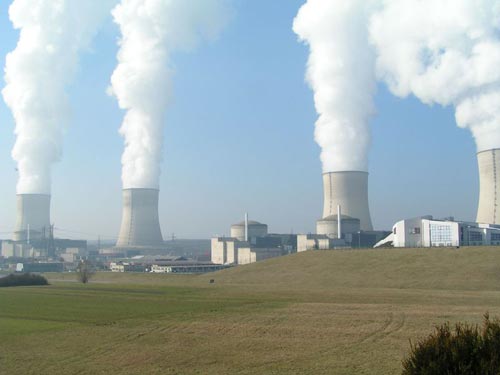 As a result, two understandable misconceptions were generated. First, that cooling towers are a nuclear device. Second, the power plant’s reactor is located inside the cooling tower. These misconceptions could have easily been dismissed if not for the news media itself. Print and TV journalists maintained that there was nothing remarkable-looking about a nuclear power plant, except for the cooling tower. Thus, they would continue to use the image for all their reports. As for the belief that the reactor was inside the tower, nearly all media bosses said it was not their job to tell the public they are wrong about something. Their job was to transmit information, not educate. Plus, the tower’s enormous volume, coupled with the cloud of moisture pouring from its top when the plant is making electricity, presented an ominous visual conducive to nuclear power plant reporting. Since most media stories on nuclear power plants were negative and typically given a frightening rhetorical “spin”, the ominous picture best fit the reporting. In addition, cooling towers, 400 to 550 ft. tall with a column of moisture sometimes climbing a mile or two into the sky, can be seen for many miles in all directions. To the media, it’s a perfect visual.

The first misconception is technically easy to dismiss. The reactor is never located inside the cooling tower. It is inside the appropriately-termed Reactor Building, which is usually a large domed structure entirely covered in steel reinforced concrete, totally separate from the tower. 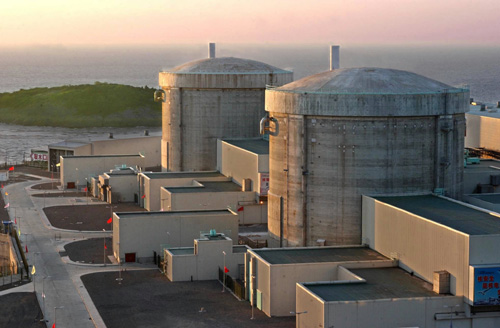 These reactor buildings are themselves elegant-looking structures, often over 100 feet tall and about 50 feet in diameter, which would probably be the media’s visual symbol of nuclear power if not for the much larger, ominously-portrayed cooling tower.

The second cooling tower misconception concerns it being a nuclear device. It isn’t. It’s little more than a giant water cooler, mandated by the Clean Water Act of 1972 for all new power plants larger than 100 megawatts electrical, in order to protect the aquatic life in the river, lake, or ocean from which the cooling water would be taken. All coal-fired, natural gas-powered, and nuclear power plants use steam-driven turbine-generators to make their electricity. When the steam has had all available energy extracted from it in the turbine, it exhausts into a large rectangular tank called a condenser.

The condenser has hundreds of rather small pipes running through it, immediately below the turbine exhaust. Relatively cool water from the cooling tower is pumped through the inside of the condenser’s piping, with the low pressure and low temperature exhausted steam engulfing the outside of the condenser pipes. The cooling water inside the pipes is considerably cooler than the steam outside the pipes, so the steam is almost immediately cools and condenses back into water. The condensed water is returned to the steam plant to be re-heated in the boiler (or in some plants, the reactor) to make more steam. When the exhaust steam is condensed, its volume decreases by about a factor of 20, which drops the pressure inside the condenser to nearly absolute zero…a total vacuum…almost as severe as the vacuum in outer space. The water flowing through the condenser pipes increases in temperature about 28 degrees Fahrenheit, on the average, from when it entered the condenser. This warmer water is sent through huge pipes to the cooling tower where it is sprayed all around the bottom of the inside of the tower. 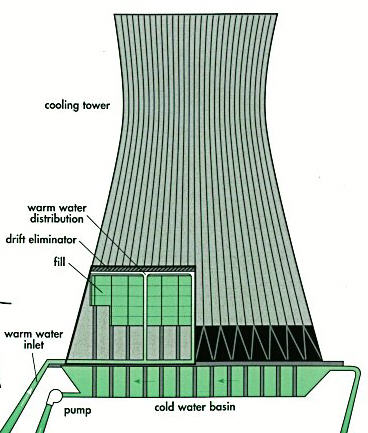 Some of the warmth is immediately released by the spraying, allowing some of the liquid to evaporate. The rest of the heat is released inside the tower as the water trickles down a series of layers of metal (or wood), called “fill”, further increasing evaporation. The cooled water literally rains back into the bottom basin of the tower. 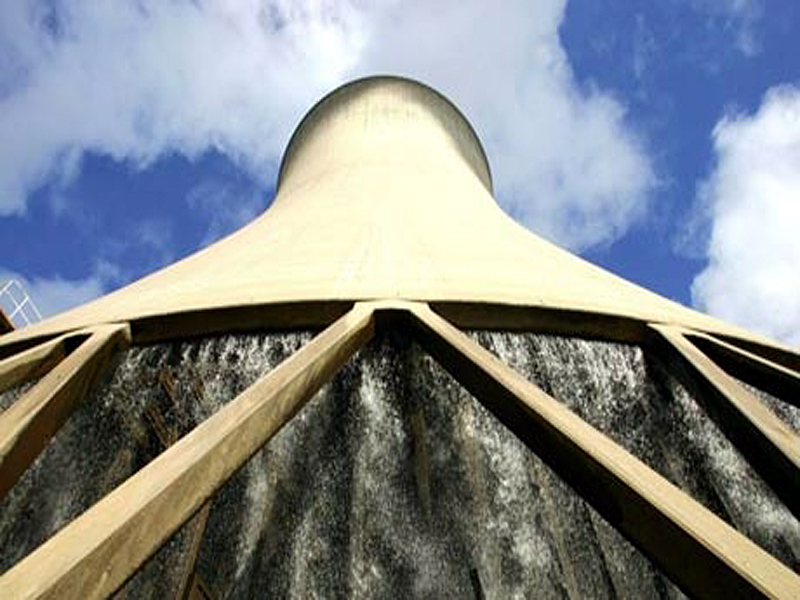 The cooled water in the basin is pumped back through the turbine's condenser to complete the cycle. Meanwhile inside the tower, the moist, warmed air naturally rises up a gigantic concrete chimney. The upper 90% of the tower is completely empty. And, the warmed, 100% humidity air is almost crystal clear...until it all reaches the top. At the peak of the tower’s chimney, the warm, moisture-saturated air cools almost instantly to the temperature outside, forming a rather dense cloud. Nothing more, and nothing less than a cloud like those that naturally fill our skies. There are more than 250 of these giant water coolers on power plants across America, and less than 100 of them are on nuclear plants. Cooling towers are not nuclear devices. They are power plant water cooling devices designed to protect aquatic life.

Why have them at all? The flow of cooling water needed to cool the copious amounts of steam exhausted from power plant turbines is literally incredible, in some cases in excess of a million gallons per minute! If the cooling water came directly from a river, lake, or ocean, the tremendous flow of water would literally suck many fish, and their eggs during spawning season, into the plant system, killing them. This is exactly what happened with large power plants built before 1972. With the cooling tower, the amount of water needed from the nearby body of water is considerably less…over a thousand times less…in order to replenish the water evaporated inside the cooling tower. These lower flows kill few fish, and usually only those sick, dying, or otherwise injured elsewhere in the natural water source. Cooling towers protect aquatic life. They are an environmental device, but in no way a nuclear device.

There is yet another misconception common to cooling towers attached to nuclear power plants; that the cloud pouring out of the tower is radioactive. There are generally two types of nuclear power plants. One is the pressurized water system (PWR), where water being heated in the reactor is kept at such a high pressure that it does not boil. The heated reactor water is pumped through another water heater, or boiler (steam generator), where the reactor water flows through a matrix of small pipes to heat a separate volume of water. The second volume of water is allowed to boil and spin the turbines.

The second type of nuclear power plant is a direct boiling system, using the acronym BWR. Here, the water flowing into the reactor is allowed to boil, and radioactive steam spins the turbines. The steam flowing through in a BWR’s turbines is radioactive.

Regardless of the type of nuclear power system used, two laws of nature makes it virtually impossible to make the cooling tower water more radioactive than what is naturally the case. First, high pressure fluids always flow into low pressure fluids, and never vice versa. When the power plant is operating, the rapid condensing of turbine-exhaust steam forms a nearly-outer-space vacuum on the steam side of the condenser pipes. The cooling water flowing inside the condenser pipes is at least at atmospheric pressure; 14.7 pounds per square inch. If a pipe leaks or breaks inside the condenser, the higher pressure cooling tower water naturally pours into the steam side. The only way to reverse this would be to stop the flow of steam exhausting from the turbine, which removes the potential source of radioactivity itself. In a PWR, the steam surrounding the cooling water pipes isn’t radioactive, to begin with. But what about radioactive steam from the BWR?

a. Reactors are not located inside cooling towers.

b. Cooling towers are aquatic environmental-protection devices, and not nuclear devices.

c. The cloud coming out of the top of a cooling tower is no more radioactive than the natural levels of the lake, river, or ocean the water originally came from.

d.There are more cooling towers on non-nuclear power plants than on nukes.

Next - What is nuclear waste? https://www.hiroshimasyndrome.com/nuclear-waste-is-it.html